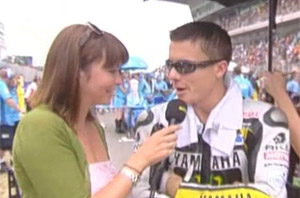 Despite knowing beforehand that it would be a close run contest between the Yamahas, no-one could have dreamed that it would end up being such a spectacular showdown. The last 3 laps beggered belief; I think it was the best race that I have ever seen. If you haven't seen it you should you-tube it because it is one of the most incredible moments of sport that you will ever see, even if you don't think you like motor-sport, you will be hooked! Both Jorge and Vale were simply astonishing and ultimately Rossi proved there was life in the old goat yet! I wrote my Daily Telegraph column on the encounter if you want to read more. It was sweltering off the track and hot stuff on.